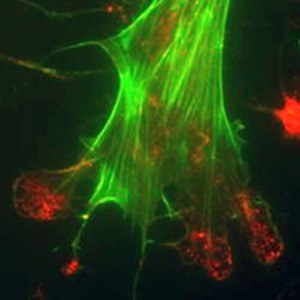 Extra- and intracellular pH (pHo and pHi) are important physiological variables that both reflect and, in turn, influence neuronal function. Nevertheless, in comparison with other cell types, the effects of changes in pHo and pHi on neuronal activity remain relatively poorly documented. Also in contrast to non-neuronal cells, where pHi regulating mechanisms constitute a physiologically-important transmembrane signaling pathway, relatively little is known about the mechanisms that act to control pHi in mammalian central neurons. This is surprising because pHi regulating mechanisms regulate not only [H+]i and [HCO3-]i; they also affect [Na+]i, [Cl-]i and the pH in the microenvironment of cells, all of which are of critical importance to neuronal function under physiological and pathophysiological conditions. In light of this background, our research is focuses on the mechanisms that regulate neuronal pHi and their relationships to disease, in particular stroke. Recent work includes:

a) studying the effects of changes in both extra- and intracellular pH on mammalian central neuronal excitability.

b) characterizing the mechanisms responsible for the regulation of pHi in mammalian central neurons and investigating how the activities of these mechanisms can be regulated by neurotransmitters and intracellular second messenger systems.

c) investigating the effects of anoxia and ischemia on the activities of neuronal pHi regulating mechanisms, especially Na+/H+ exchangers. We are also investigating the relationships between anoxia- and ischemia-induced changes in pHi, [Na+]i and [Ca2+]i in mammalian central neurons, and assessing the contribution of alterations in the activities of pHi regulating mechanisms to these changes.

Our studies utilize electrophysiological recording techniques and imaging techniques to estimate the intracellular concentrations of Ca2+, H+ and Na+ ions, either singly or in combination, and assess the effects of pHi regulating mechanisms on cytoskeletal events at the growth cone.