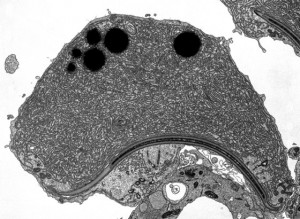 In my laboratory we are interested in the interaction between intercellular junctions and the cytoskeleton in cells within the context of tissues, and in determining how the two systems function together to generate complex remodeling events in epithelia. We use the seminiferous epithelium of the mammalian testis as an ideal model system for our studies because intercellular junctions are large, easy to visualize, and can be readily isolated. Moreover, all three major elements of the cytoskeleton (actin filaments, intermediate filaments and microtubules) are abundant and associated with junctions. Importantly, junctions and elements of the cytoskeleton together are associated with major epithelial remodeling events, such as sperm release, turnover of the blood-testis barrier, and the translocation of developing sperm cells, that occur during spermatogenesis. We currently are exploring two major hypotheses:

(1) changes in position of spermatids in the seminiferous epithelium are due to the microtubule-based transport of specialized actin-associated adherens junctions that occur in Sertoli cell regions attached to developing spermatid heads;

(2) actin-related tubular membrane structures, termed tubulobulbar complexes, that develop during junction disassembly in the seminiferous epithelium are ‘sub-cellular machines’ responsible for internalizing ‘intact’ junctions during sperm release and turnover of the blood-testis barrier.

We make extensive use of imaging techniques (electron microscopy, conventional fluorescence microscopy, and confocal microscopy) in our research.