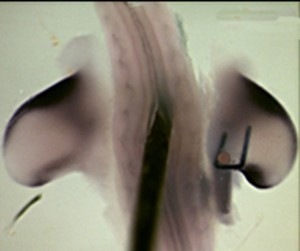 Embryology; Gene Expression
The embryonic face of vertebrates including humans, mice and chickens is very similar. Discrete buds of tissue, called prominences surround the primitive oral cavity and these grow together to form the face. My lab is concerned understanding face development from very early times after the embryo starts to form the brain, up until the fully differentiated skull has formed. I use the chicken embryo as my model organism because unlike mammalian embryos, the face is directly accessible through a window cut into the shell of the egg. Bird embryos are can be manipulated in various ways to alter gene expression and the results of avian studies can be applied to other vertebrates.

My laboratory is working on two main research themes. The first is the identity of the facial prominences. For example we ask questions such as when does the maxillary prominence know it will form the upper jaw as opposed the centre of the nose. Recent work from my lab has identified two molecules that work together to specify the midline of the face (Lee et al., 2001). We are presently extending these studies, which were not possible until there was a method of reproducibly transforming one part of the face into another.

The second focus area is cleft lip. We have for many years been able to induce facial defects in the chicken embryo but the significance was only recently made clear. The human form of cleft lip with or without cleft palate (CL/P) is a common birth defect and is most often not associated with a syndrome. It is thought that there is an interaction between the individual’s genes and the environment to produce the CL/P. However because CL/P is caused by an interaction of factors we need both genetic and other methods of identifying the causes. The chicken embryo is an excellent model for studying cleft lip since the environment can be locally changed in many ways such as beads soaked in chemicals or by surgical manipulation. Thus using the chicken embryo as a model for CL is an excellent complementary approach to human and mouse genetic studies. Our experiments will confirm the importance of candidate genes identified in human studies to the process of lip fusion.

My laboratory combines unique training in classical experimental embryology techniques, methods to deliver DNA into cells as well as gene expression studies. Experience in the two approaches will prepare the science student for an exciting research career in Developmental Biology or in Craniofacial research.