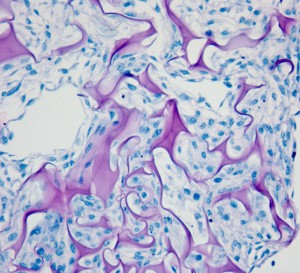 For good reason, much of modern cancer research has focused on genes whose products regulate cell growth and survival. However, it is becoming increasingly clear that genes whose products regulate tissue architecture play a critical role in tumour progression. In my laboratory we are determining how the functions of such genes are co-opted during breast and ovarian carcinoma progression.

Breast and ovarian carcinomas both arise in ‘epithelia’. Architecturally, the epithelial tissues affected are made up of tightly linked cells that line ducts (ie. breast) or surfaces (ie. ovary). The links between epithelial cells are initiated and maintained by cell adhesion molecules (ie. cadherins). We have developed specialized, 3-dimensional models that allow us to recapitulate normal epithelial tissue architecture outside the body in a tissue culture dish. We are now modulating the expression and function of cell adhesion molecules in these cultures to determine how architectural disruption allows epithelial cells to break away from the original tumor and begin invading surrounding tissues.

Tumor cell invasion is a prerequisite for metastasis. For invasion to occur, cells that have been released from the original tumor mass must be able to migrate through the extracellular matrix (ECM) which acts as a scaffold between and within tissues. Specialized adhesion molecules that link cells to the ECM (ie. integrins) generate signals within cells that cause them to either remain stationary or become migratory. We are determining the specific molecules that are involved in regulating this migratory switch in breast and ovarian tumor cells.